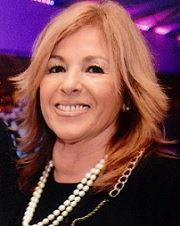 • Chairman of the Consumers Committee

• Chairman of the Cellular Committee

Born in 1954, lives in Nordia. The widow of the late Motti Israel. Mother of three and grandmother of six grandchildren.

She did her military service as a registrar in the Haifa Military Court and later served two years in the Ministry of Defense.

In 1993, she was accepted as a Diamond Exchange member and engaged in diamond marketing in the US and the Far East.

She is now part of Alia Diamonds Ltd. and has been engaged in public activity for several years.